On Monday, September 17, 2018, a crowd of more than two dozen members of the Humboldt Park community gathered near the east wall of the Metra underpass at  1801 N. Kostner to celebrate the official unveiling of a massive, richly colored mural, titled “Esperanza, Communidad, y Cultura (Hope, Community, and Culture),” which was created by students at North-Grand High School. Those gathered included Alderman Gilbert Villegas of the 36th Ward, representatives from the Chicago Fire Department, and many of the students, educators, artists, and school staff members who contributed to the design and installation of the mural, which was funded by Chicago Arts Partnerships in Education (CAPE).

“Being part of this project inspired us to be ourselves, and we want the mural to inspire incoming freshman to be themselves, too,” explained Ms. Ballesteros, a student at North-Grand,“Our mural demonstrates how people are all connected in our school, how we’re all together and not leaving each other behind.” 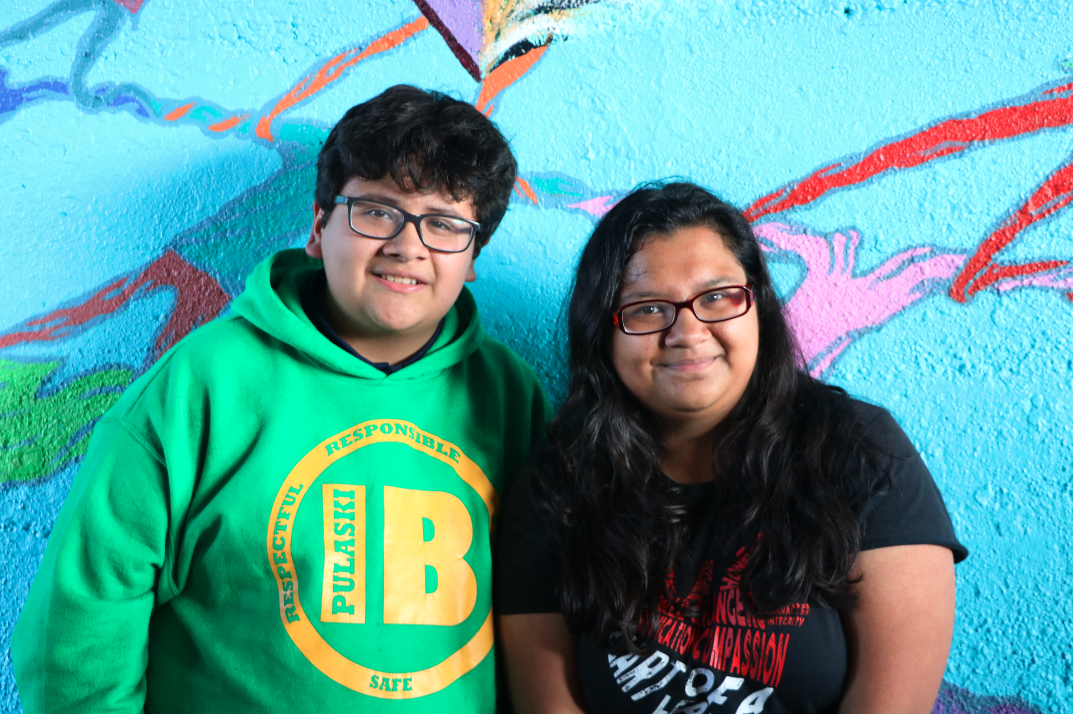 Miguel Ballesteros and Angelica Ballesteros, in front of Angelica’s favorite section of the mural

Alderman Villegas remarked, “It’s impossible to overestimate the importance of this project to our community and the students at North-Grand High School. They have been working hard to make this happen for three years. This is about more than just the beautiful paint on the walls; it’s about dedication and teamwork.”

“The students have been involved in every single step of this process from brainstorming of the concept to designing the composition and now painting,” said Mr. Perez, a long-time CAPE Teaching Artist and 3Arts Chandler Family Awardee whose vibrant, large-scale murals and mosaics can be found in neighborhoods and schools across Chicago. “Over 100 community members have worked on this mural! We have gotten a lot of thank you’s and waves from pedestrians, and we’ve had passing drivers stop to give us water, Gatorade, and donuts. It’s such a beautiful way for our students to connect to the neighborhood.” 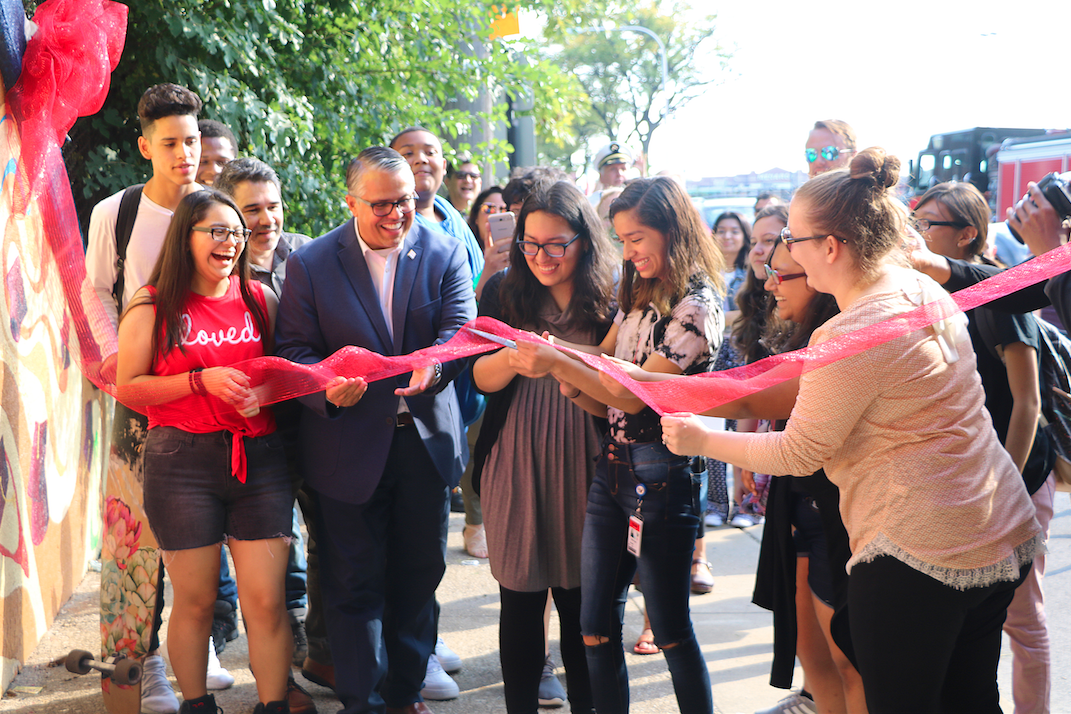 After the speakers concluded, the crowd moved closer to the finished mural on the east wall of the underpass, where a sparkly red ribbon waited to be cut. It took a few tries, as the ribbon cutters and onlookers laughed, but finally the ribbon fell and the mural was officially dedicated. Alderman Villegas and members of the Chicago Fire Department strolled the underpass to examine the artwork and speak with the young artists about their creation. The mural’s bold colors present viewers with motifs related to the heritage and culture of the students and their broader community, as well as inspiring images and poetry that give new students a glimpse of what to expect from their four years at North-Grand High School. The mural prominently features an array of eagle-owls, the North-Grand school mascot. 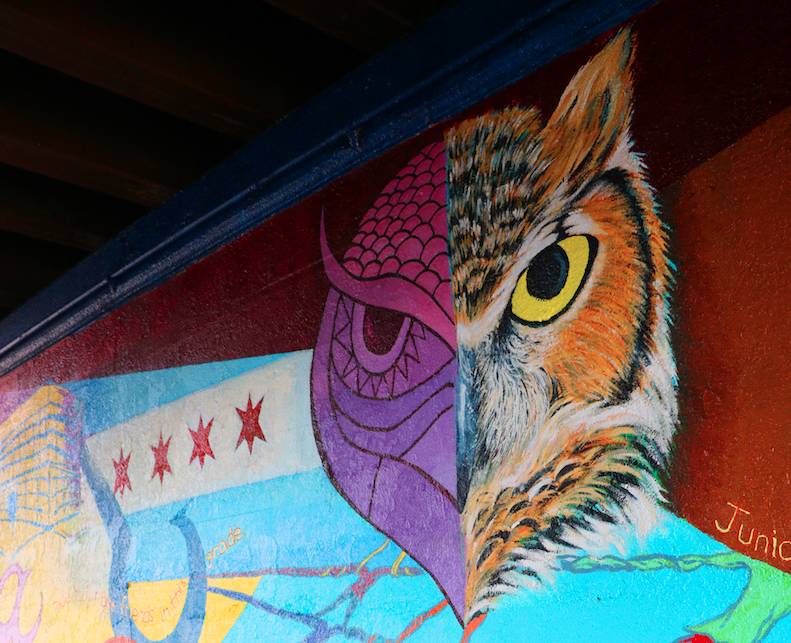 The students and teachers are already planning to expand on their work by painting the west wall of the underpass next year.  The mural, first proposed three years ago as part of the 36th Ward’s participatory budgeting process, eventually found its way to completion due to the persistence of the North-Grand community and funding from CAPE.  Metra granted permission for the project, which is installed on their property.

The mural project is the newest extension of a long-term partnership between CAPE and North-Grand that brings extensive teacher training, material resources, and arts integration programs to North-Grand classrooms, at no charge to the school.  These CAPE programs are generously supported by grants from the Illinois State Board of Education’s 21st Century Community Learning Centers program, the Mansfield Family Foundation and other corporate, foundation, and individual donors. 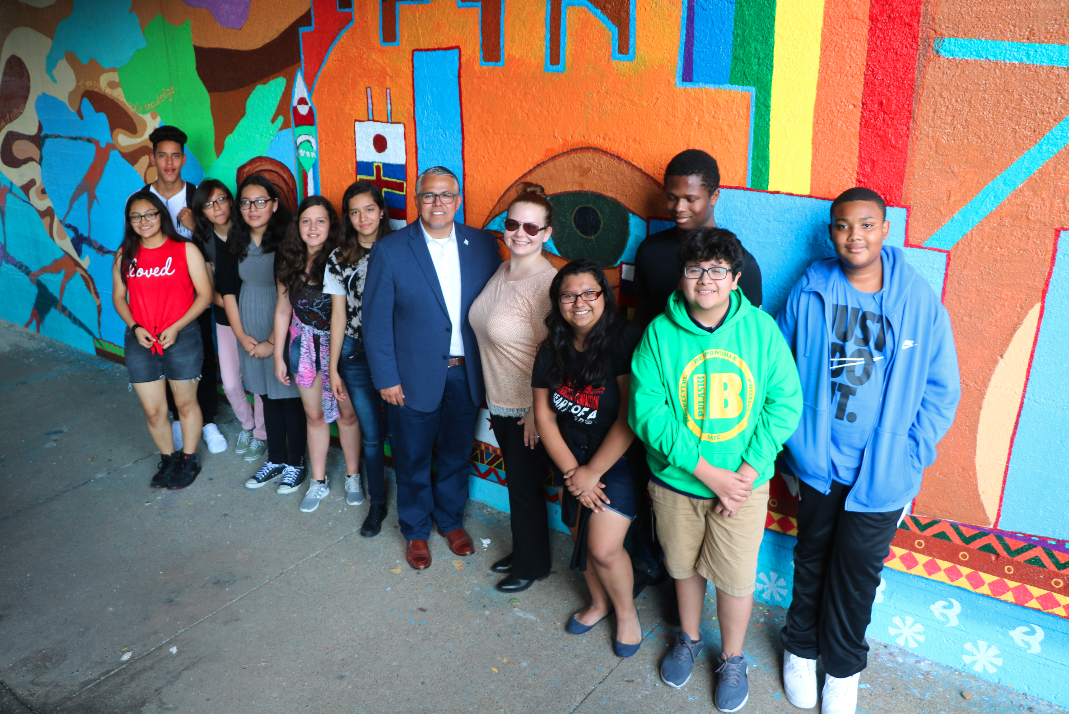 Alderman Villegas, Principal Emily Feltes, and some of the many students who designed and painted the mural 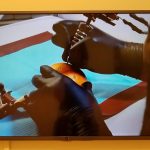 Odes and Tattoos: An Exhibition at the Chicago Cultural CenterThe CAPE Blog 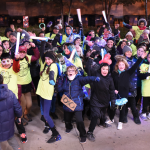 Arts in the Dark 2018Events, The CAPE Blog