STEAM Ahead April 2022: Mapping visual arts into social studies at the Barack Obama School of Leadership and STEM SD163

Marc Fischer, one of CAPE’s most innovative teaching artists, has been working with the Barack Obama School of Leadership and STEM SD163 in south suburban Chicago Heights.  In this post, Marc shares some of the experiences he’s had in working with a group of 4th graders to add visual arts to the STEM curriculum.

“Through the magical organization CAPE, I have been working with three classes of 4th graders and their Social Studies teachers to create this map of Illinois. It has been a journey, to say the least. How do you incorporate STEAM content, what the teachers want, what the students want, what the program goals are, and what I want with about 60 children?…”

When we started in early February, I made the 4th graders really frustrated.  I had them write labels on pieces of paper with the names of various cities and places from all over the state. Then they had to find where to attach them to the map that they had painted. This proved impossibly hard and very few things were attached. 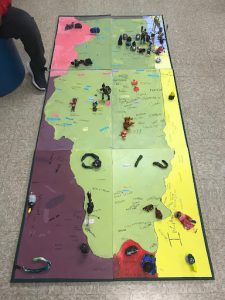 I gave them a little pep talk and told them that making art is not like cooking a frozen pizza where you follow a couple instructions and you are done. I tried to comfort them by telling them we were all making something we have never made before, myself included, and sometimes things don’t go the way you thought they might, and you need to try another approach. 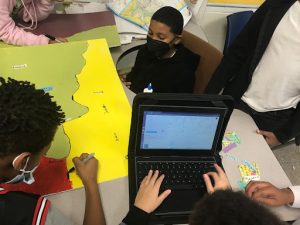 Today we stopped trying to glue down labels and a smaller group used other printed maps, including road maps, as a guide to write directly on the sections. Each class worked on the entire state, adding details throughout the day. Reading maps is really hard for 4th graders and a lot of them hated it, but we did it together anyway. 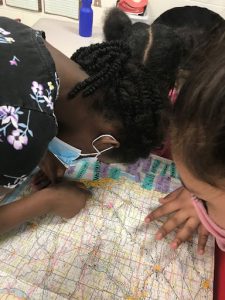 The students took great joy in noticing that some of the previous students wrote things in the wrong place so there was a lot of correcting. And correcting means getting to use the paint, and using the paint is much more exciting to most people than writing (not to me though). 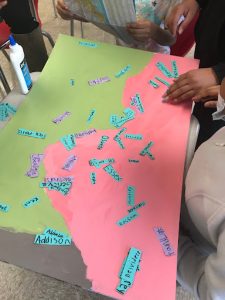 We still have three more classes to address some unfinished business but today was pretty epic. Newly added to the map: pumpkins grown in Morton, IL, Gia – a model, Illinois Spiderman, the rapper Juice WRLD, the Park Forest Police Station, three versions of Anish Kapoor’s Cloud Gate (not shown – and a 4th one is drying), multiple varieties of snakes, owls, and other creatures, a zombie owl (not shown) and so much more. Whew!

This has been a challenging collaboration at times and I’ve worried that it might never come together the way I imagined in my head (I’ve certainly never made anything like this before!) but in the end I think all the students and teachers were kind of wowed by how cohesive it is. For a while each class only saw one third of the map and they made the sculptures before we started on the map, so it was very abstract how all of this would gel together. Ultimately, we’ve ended up making something that about 60 people contributed to. 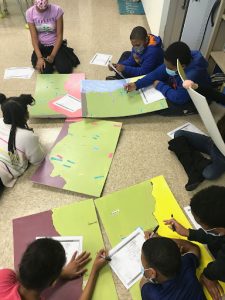 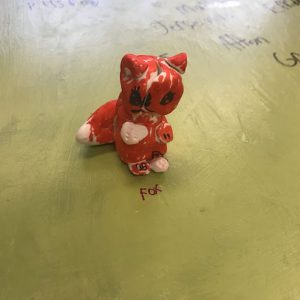 Editors note:  This project is part of CAPE’s STEAM Ahead initiative serving SD163 in south suburban Chicago Heights, IL.  The project is funded by the US Department of Education’s Arts Education Program.  The project will continue until June 2023.  In May 2022, projects from the STEAM Ahead Project will be on display at the Salon Artists Gallery in Park Forest.

The students had fun creating, reflecting, and connecting virtually. What was your favorite part of this classroom story?  Let us know in the comments below. 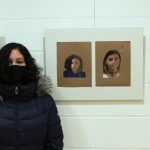