Comadres en el Arte, an exhibition of art and community building by mothers from CPS schools

As a part of CAPE’s program Supporting Communities in Arts Learning Environments (SCALE), mothers from several CPS schools present work that speaks to family, history, and dreams. Through their work with Chicago Arts Partnerships in Education, these mothers have become artists and community builders who strive to break barriers that exist in their schools, families, and ever-changing communities.

Parents at our SCALE Program have been participating in Parent art classes throughout the school year and exhibited their work at the Intuit Gallery. These artists, who are primarily Mexican and Mexican-American mothers, address issues of migration, motherhood, and cultural stewardship through their work. The title “Comadres” signifies the deep bonds and support networks that have formed around these classes amongst the participating parent-artists.

Parents at Waters Elementary mapped and narrated their migration stories in cardboard and video. They also spent significant time building their English language skills through conversation and translation games. 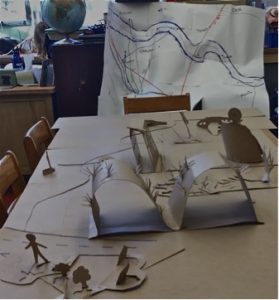 At George Washington High School, the parents started the year learning how to do block printing, starting with making greeting cards for the holidays. Through conservations the group decided to focus on the idea of food memories. Their teaching artists told us, “The conversation turned to special foods they were preparing for the Christmas and New Years holiday.  This set in motion the idea of a painting project to begin in January 2016 upon return from winter break.”  This parent group went on to paint still life paintings of special foods, and wrote accompanying text that highlighted significant moments and individuals in their families.

The group then exhibited the work in their neighborhood, inviting their children and their own parents, sharing their food memories with these multiple generations. 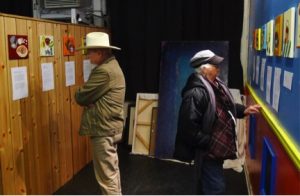 At Telpochcalli Elementary, CAPE partnered with the local community organization Telpochcalli Community Education Project (TCEP) for a parent art making workshop around the theme of family leadership. Parents at Telpochcalli created paintings and prints depicting future visions for their families. As the parents developed their projects through ongoing drafts and peer critique, parents built both their confidence in their art techniques as well their confidence as leaders in their own families. 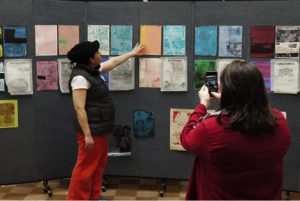 “I used to have really bad self esteem. One day I decided that I have to change that and that I am a mirror for my 3 children. I learned to accept myself the way I am and not to care what others think about me. Today when I spoke about my artwork in front of the other parents, I had no nervousness and no fear. This was the first time that’s ever happened to me.” –Telpochcalli parent-artist. 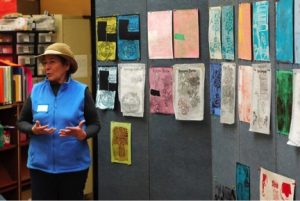 “I was so scared to talk [about my art] in front of everyone and thinking what can I say that they’d want to hear, but after I did I realized that I do have important things to say.” -Ramona, Grandmother of a Telpochcalli Elementary student (above)