Inside/Outside: A Conversation with the Cognate Collective

In Fall 2018, CAPE and one of our after-school classrooms at Telpochcalli Elementary collaborated with the Sullivan Galleries and the Cog•nate Collective to create art guided by students’ interests and informed by their school and community. Click here to read an overview of the original project.  What follows here is a more in-depth interview conducted over email with Cog•nate Collective’s Amy Sanchez Arteaga and Misael Diaz. The work described below will be on view at CAPE’s INSIDE/OUTSIDE exhibition from January 31 through February 8, 2019. 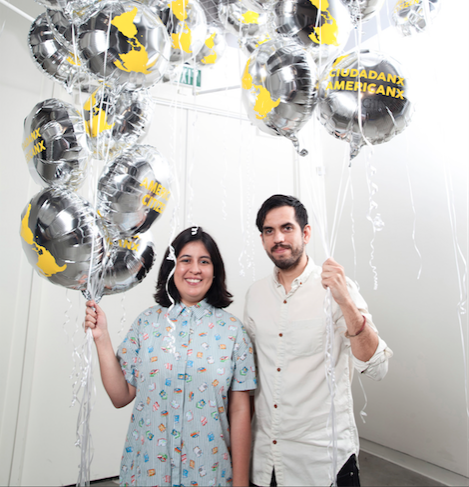 Cog•nate Collective: We collaborated with William, Erin, and their students from the after school art class to undertake series of recordings, from which we produced a hyper-local radio broadcast, as well as an extension of a project we call “Protest Balloons.” After conducting a workshop where the students learned to use audio recorders and learned interviewing and audio capture techniques, they conducted interviews with teachers, classmates and each other, and also made field recordings of different sounds around their school. Cog•nate edited these recordings into a series of audio pieces that we broadcast via a hyperlocal radio transmission for students, family and community members who visited our culminating listening party. During this party, William produced stencils with some of the language from the interviews, and students used the stencils to inscribe mylar balloons with these words — each student produced two balloons, one to take home with them and one to place somewhere in the school for fellow students to find the following day. Throughout our collaboration we were so impressed at the level of expression, curiosity, criticality and energy that the students shared with us. It is a testament to their families, teachers at Telpochcalli, and the great mentorship they receive from William and Erin. 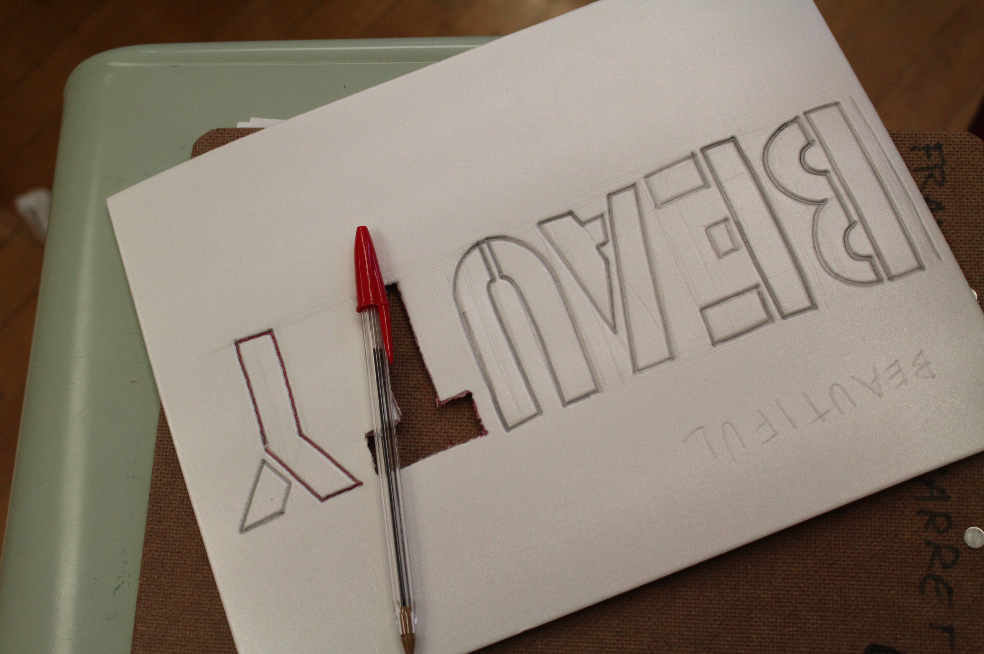 CAPE: In what ways did your art practice outside of Telpochcalli intersect with this project? How is this connected for you?

Cog•nate Collective: Both the radio and balloon projects are projects we have undertaken as workshop series with other students. Previously however, those students were mostly college-aged, so we were excited for the opportunity to do this work with younger people. In the work we have done with older students we speak about concepts such as citizenship, and belonging, and the ways that we can all enact citizenship through participatory practices in our community. At Telpochcalli, we decided that instead of framing notions of “Citizenship” we would simply speak about notions of home: what it feels like, what it sounds like, where we feel wanted, and where we feel safe. The reflections that are generated by these questions become building blocks of sort for how we understand citizenship and belonging in our work. We ended up having rich conversations with the young students about safety, family, migration, and their aspirations and dreams for the future. 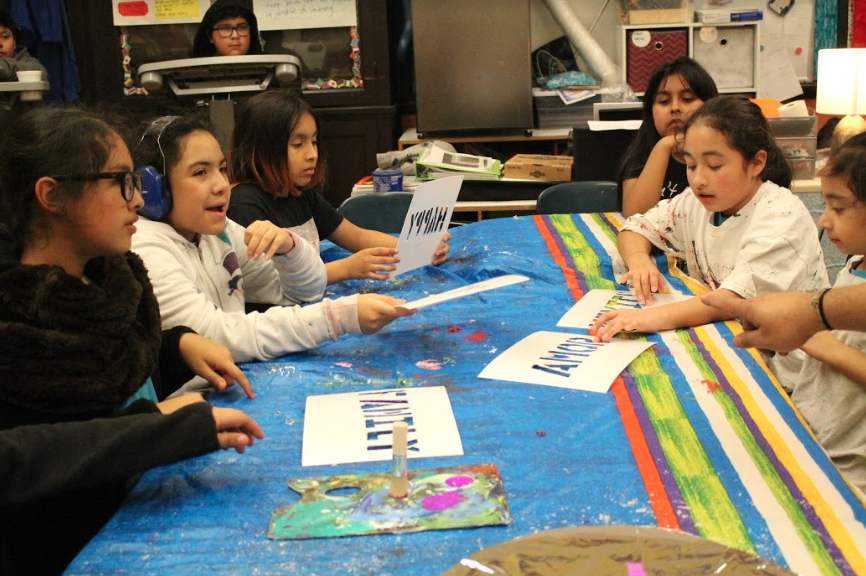 “Working with Cog•nate felt like they were part of our family.” -Adrian, 11 years old

CAPE: Where do pedagogy and art making intersect? How did that transpire in this project?

Cog•nate Collective: We often describe our practice — and the work in the exhibition Talking to Action, which brought us to Chicago — as developing/facilitating public pedagogical platforms: spaces/opportunities for learning and making with one another in community. Within this, we think about establishing platforms where participants can become collaborators, who are able to use personal experiences to ground/inform their contributions to the collective production of knowledge and/or of art. And, in the process, we hope those we engage with come to appreciate the value of their experiences, of their ways of knowing and making, and see how these can establish points of contact, of solidarity and exchange with others in their community. In talking with William and Erin, prior to our arrival in Chicago, they shared that this group of students was learning about art and social justice, so our intention became to think of ways that our skill set and/or equipment could create a platform for these students to tell stories about their lives, and the places they call home. From the outset, our hope was to leave the students with a series of audio pieces that they could be proud of, and also with some of the initial skills to make more recordings after we had departed. And, perhaps most importantly, to give them a sense that their stories and their voices are important, and need to be heard. 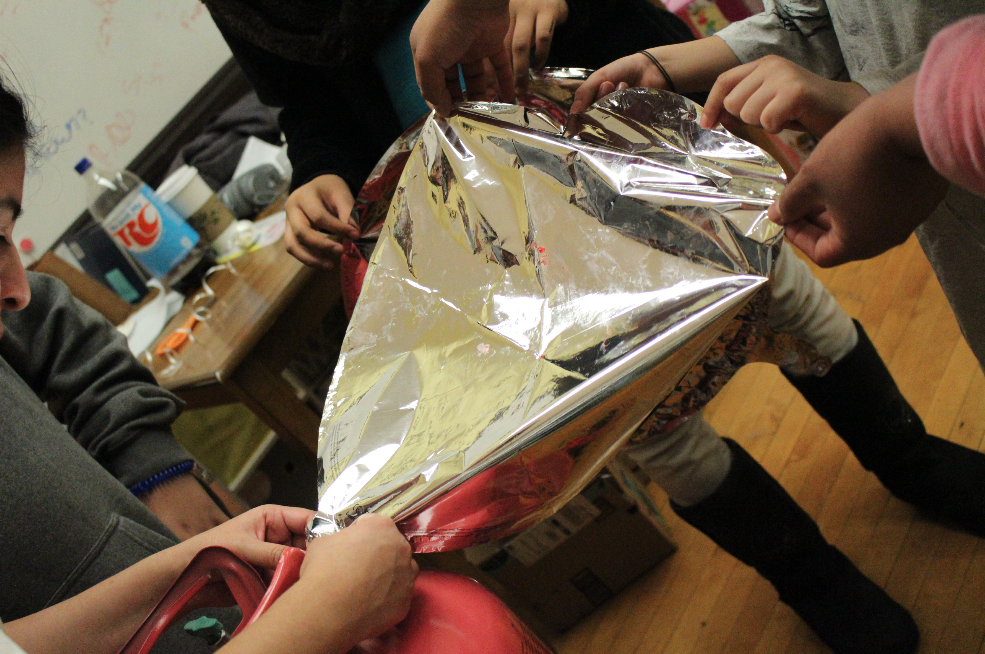 CAPE: Where does identity and community come into play in your work? In this project? How does this project connect to larger ideas you have about the role of art making in life?

Cog•nate Collective: In our work we often think about the ways that our bodies are raced/classed/gendered and how that intersects with the experience of being a border subject: someone who lives in a border-ized region, whose life is often marked by the presence of borders. We have undertaken this work with community groups throughout the US/Mexico border region between Los Angeles, CA and Tijuana, BC, trying to foster ways of being in and thinking about community not just along the lines of sameness — community as those who we recognize because they are similar to us — but as a social and physical space where difference can be recognized, negotiated and ultimately valued — community as those who we recognize (and value) in spite of our difference. Art becomes a nice medium to engage in dialogue because it is understood that it is very often subjective, that an artwork can have different meanings to different people, because readings are often informed by unique, personal experiences. And at the same time, artwork can come to represent and celebrate things that bring us together, that make us feel like we belong.

We were so inspired to see that the students at Telpochcalli are using art in these ways to engage, think critically and communicate about their identity and their cultural history, not just in one language, but in TWO! 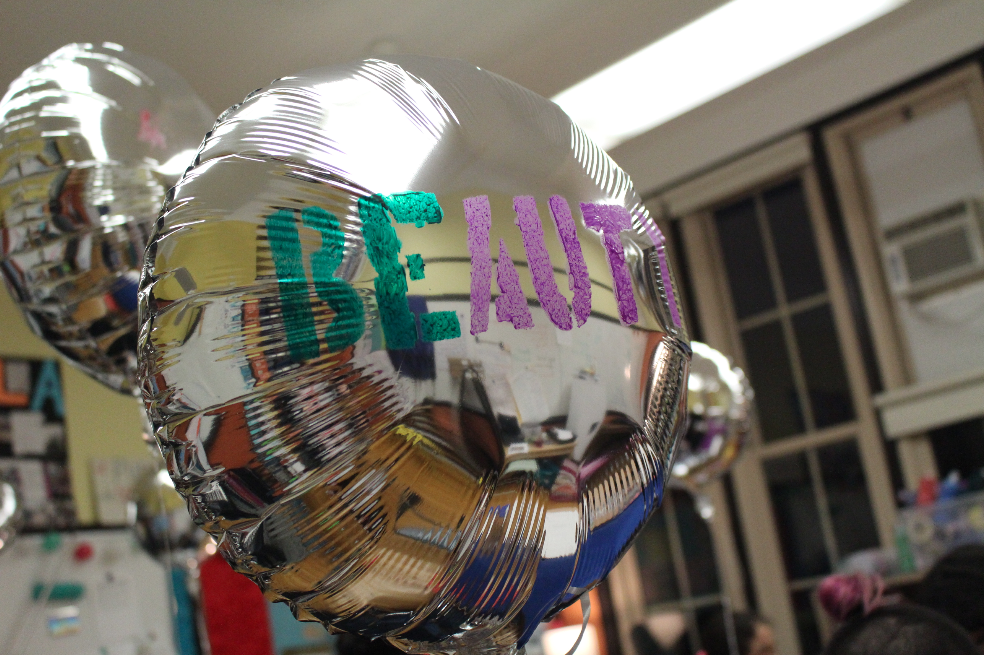 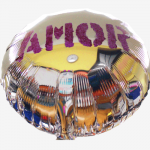 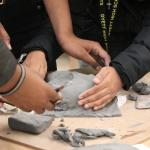