Friends With 401(k) Benefits: A Team Us Comedy Special

If you joined us for Friday Night Live last spring, you’re already familiar with the comedic stylings of Team Us Comedy, but if you weren’t able to make it, let us introduce you: Team Us Comedy was founded in 2015 to produce shows that fully represent the hilarious comedy community of Chicago – full of women, people of color, and plenty of differing opinions. They’ve been acclaimed by the RedEye and the Chicago Reader for their ability to bring the city’s best comics into unorthodox rooms all over Chicago, and now they’ve got a new special in the works: Friends with 401(k) Benefits!

In January, Team Us Comedy will film their first stand up special and giving a portion of the proceeds to CAPE! Titled, Friends With 401(K) Benefits, this event will be unlike any other traditional comedy special — this will be one special starring three comics. The comics are: Meghana Indurti, chosen as one of 9 finalists for StandUp NBC in Chicago by NBCUniversal in 2017, Vik Pandya, who’s opened for Roy Wood Jr. & Michelle Wolf of The Daily Show, and Tyler Fowler, a regular feature and host at Zanies Comedy Club.

Click here to get your tickets for
Friends With 401(k) Benefits!

Please join us for a great night of comedy in an awesome setting!  Remember, these shows will be recorded live, so please arrive on time and do not leave your seat until the show ends.

More about Friends With 401(K) Benefits and Team Us Comedy

Friends With 401(K) Benefits mixes three different voices into one unique special. From Pandya’s sharp self-deprecation and observational humor on dating to Indurti’s rapid-fire, acerbic one-liners on American culture to Fowler’s hilarious storytelling about growing up Catholic and working in corporate America, there’s something in there for every taste.

Boeing Grants $50 Million+ to CAPE and other Nonprofits WorldwideNews, The CAPE Blog 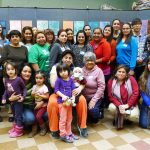