This past summer we had two CAPE Interns, Cady De Camara, and Sonia Peters, who published independent projects that detail their research interests, using data collected from class visits and discussions with teachers and artists.

As an intern this summer, I was given access to one of CAPE’s past Professional Development sessions on cultural capital. Teachers and teaching artists were asked to reflect on the following question: “in what ways is my classroom wealthy?”

It was great to hear teachers’ and teaching artists’ thoughtful responses. Their answers focused on the different types of wealth that their students possess, such as creativity, bilingualism, resilience, and more. Their wonderful answers made me curious about the extent to which students are aware of their own value in CAPE classrooms. Furthermore, why is this awareness important? And what are the best classroom practices for promoting awareness of cultural capital in students?

Yosso’s framework draws upon the work of Pierre Bourdieu, a social theorist, who argued that upper- and middle-class families possess non-tangible wealth in the form of knowledge and culture. Yosso’s theory of cultural wealth contradicts abundant research that has used Bourdieu’s theory of cultural capital to declare that students of color and low-income students experience a cultural deficit. The notion of a cultural deficit reinforces dominant hierarchies that valorize white and upper-class traditions, behaviors, and practices as a more prestigious culture. With this mindset, traditional school systems encourage assimilation into so-called “prestigious status cultures.” Meanwhile, as seen in CAPE’s PD, Yosso’s alternative framework encourages schools and teachers to focus on the forms of cultural wealth that students of color provide.

If students believe that they are limited by a cultural deficiency, they may experience insecurity and shame. Thus, marginalized students’ perception of their cultural capital is tied to their own confidence. Ample research has suggested that confidence is one of the best predictive variables in performance in both English and math. Students’ awareness of the cultural wealth that they bring to a classroom boosts self-esteem and confidence which can, in turn, support academic achievement.

Some recent research has investigated the best ways to facilitate awareness of cultural capital in academic settings. A 2015 study examined the practice of “debriefing” with an emphasis on understanding cultural capital in various college classrooms. The study found that a combination of individual reflection such as a written journal or silent time followed by a group debrief was optimal. They argue that collective debriefing sessions offer alternative viewpoints from peers with different schooling experiences, enhancing students’ understanding of the multiple ways that cultural capital can impact educational experiences and outcomes. Since the debriefing was mostly a discussion among the students, they were able to learn directly from each other. This proved more powerful than hearing the same information from a professor who is sometimes seen as the only expert in the classroom. Debriefing reaffirms that each student has a unique background and perspective that the rest of the group benefits from hearing.

The best way to measure students’ awareness of their own cultural wealth would be to interview them directly. However, given the limitations of this summer project, I chose to study teachers’ and teaching artists’ documentation of their past CAPE classrooms to find activities and practices that promoted awareness of students’ cultural wealth.

In many CAPE classrooms, modified versions of debriefing were used to keep students engaged and in conversation with one another, especially during remote classes. In one CAPE after-school program at Waters, debriefing and reflection were used to start and close out most sessions:

“Because we also shared out substantially on the small events of our daily lives, the class quickly became a place to celebrate our individual interests, hobbies, and skills as artists and makers…students also came to understand that we, as students of Waters, of CAPE, and of drama, had created a distinct and powerful culture”

When school systems use Bourdieu’s definition of cultural capital to inform their curriculums, they encourage assimilation through the consumption of traditionally valued media or arts. However, I’ve found that CAPE teachers use Yosso’s alternative framework of community cultural wealth by prioritizing student individuality and cultural background. In one CAPE dance class, teachers emphasized cultural difference and appreciation rather than imitation or assimilation:

“We used this class…to talk about difference. Many of the dance and musical art forms were unfamiliar to us, so we noted those differences and highlighted the similarities. Our focus in the class was to be inspired by other people’s and communities’ ways of expressing themselves, rather than copying a culture that we might not have a relationship to besides our class time.”

One of my favorite examples of awareness of community cultural wealth was in a series of poems that students wrote in a class at Telpochcalli. Their works were inspired by the poet Sonia Sanchez who celebrates children’s voices and marginalized identities.

Our voice can say what’s right

Our voice can say what’s not right

Our voice can overcome the bad

This student uses the plural “our,” even ending the poem with the word ‘our.” Instead of focusing on a singular voice, the student celebrates the power of a collective voice, indicating an awareness of their own cultural capital, specifically familial and social capital.

The CAPE 2019-2020 programs that I reviewed for this project have promoted student awareness of cultural capital by structuring class around creative projects with time for debriefing and reflection. These practices celebrate students’ individuality and the inherent value of their unique backgrounds and personal values. Students bring so much wealth to CAPE’s classrooms, and it is essential that they are aware of this wealth. 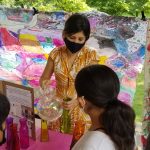