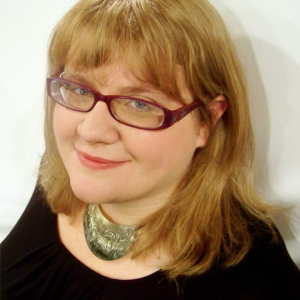 Bio:
Kat Pleviak is the Artistic Director and founder of Sea Beast Puppet Company in Glen Ellyn, IL. She has an BFA in Directing from the University of Illinois (2002) and an MFA in Youth Theatre and Puppetry from the University of Hawaii Manoa (2009). Under Kat’s direction Sea Beast has initiated a number of exciting puppetry projects including a series of original projects and productions including the Puppet Meltdown Puppet Slam, “The Shadow Puppet Conspiracy”, “The History of Light” and “Méfiez-Vous de la Vache-Garou”, which won best in show at the Chicago Fringe 2013. Her work has been featured all over the country including the Field Museum of Chicago, Illinois Wesleyan University, Fever Up, Chicago Shakespeare Theatre, Lookingglass Theatre Company, the Art Institute of Chicago the Detroit institute of Art, and the Skirball Cultural Center in California. She has also presented a variety of performances, workshops and pre-conference intensives at Puppeteers of America festivals dating back to 2006 and was a performer with Puppet Sports of Quebec at the UNIMA International Puppetry Conference in Perth Australia 2008. Most recently Kat has been working with C.A.P.E. as a teaching artist at Leman Junior High in West Chicago, IL. She has been a member of the Puppeteer of America since 2002 and has served on the Board of Trustees, The Scholarship committee, the Archival committee, the assistant Workshop Coordinator for the Minneapolis National in 2007, and is their current Membership Officer. She has been published multiple times in the Puppetry Journal and was a featured artist in Puppetry International’s issue of “40 under 40.

Artist Statement:
Developing creativity and self discovery through exploring design.

His art projects critically listen to the experiences of historically marginalized people. He emphasizes the conscious process of collective knowledge the importance of artmaking in amplifying underrepresented stories and identifying support networks that aim to organize just futures.

Through play, social justice, and culturally responsive art education, he invites people to imagine and articulate their collective needs radically. Our resilience is practiced by our ability to imagine, learn, and teach cooperatively, identifying common themes and engaging in dialogue that addresses how we can use our collective creative resilience toward mutual liberation.

Back to the full list of CAPE Teaching Artists